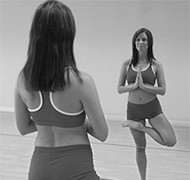 Galway native, Tracy Dunbar introduced Hot Yoga classes to the people of Galway and indeed to the West of Ireland in 2005 when she opened up her purpose built Studio. The success of Hot Yoga Galway has resulted in Tracy being honoured with many prestigious awards including the Junior Chamber Outstanding Young Persons of the Year Award for Business, Economic and Entrepreneurial Accomplishment and the Business Professional Womens (BPW) Most Innovative Business. Hot Yoga Galway has also featured on RTEs Nationwide and The City Channel.
Tracy believes that the phenomenal growth in its popularity since it opened is due to the fact that Bikram Hot Yoga is the perfect lifetime fitness programme and is equally challenging for men and women of all ages and fitness levels.

As well as being a very experienced and qualified Bikram Yoga Teacher, Tracy has also trained with The Barkan Method of Yoga at Level 2, Hatha Yoga, Vinyasa Yoga, Pregnancy Yoga and Children’s Yoga. She looks forward to going to work every day and thoroughly enjoys meeting and having fun with her students and watching their progression in their practice. 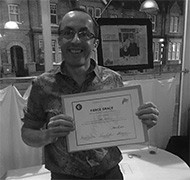 Yoga is never-ending. There is always more to explore as a practitioner and as a teacher.

March 2010, my sister posted (about my nephew) on Facebook ‘ Matteo is now doing down dog 🙂 ‘ – my reply ‘What does that mean?’. If Someone had told me then that i would end up becoming a Yoga teacher I wouldn’t have laughed at them, I would have thought they were cracked. My biggest fear walking into yoga for the first time was the fear of been the only man in the room, but after 15 minutes i didn’t care, I knew I was going to be doing yoga for the rest of my life. January 2013 I joined Bikram Yoga Athlone. Within weeks my average yoga attendance became 6 classes a week.

I started doing yoga simply because a friend said ‘everyone should do yoga’. I had no injuries, no health issues and no other problems at all. I couldn’t touch my toes but I still thought my body was in good shape. I really did. But when I started yoga I suddenly saw what my body couldn’t do. I looked at the people in the front row and was shocked and amazed. But, I liked how my body started to improve and even though I was improving I was still convinced I could still never match the flexible yogis in front of me. My body improved by a few inches each week then it became millimetre by millimetre. Every so often I would hit a plateau for a few months then the improvements would start again. My body felt great all of a sudden, toxins were out of my body now. I suddenly started matching the good yogis in the front row, something I figured would never happen. But it did.

But yoga is not about the perfect pose and looking fantastic, it’s about looking after your body. When I am an old man I want to be walking straight with no pains in my muscles, ligaments,, joints or any part of my body., that is why i am doing yoga. “Don’t worry about your depth, worry about your form”, Tricia would say to the class. Depth will come with time and thats great but looking after your body is top priority.

I also noticed how my diet improved, with all the toxins flushed out I craved better food and suddenly the bad foods tasted actually bad. By doing a regular Yoga practice I naturally wanted to eat better.

What is also beautiful about a yoga class is that it actually is an open eye meditation. I would be sweating and working hard in class yet I discovered that my mind was the biggest challenge in class. I was not and still am not into meditation but this open eyed meditation suits me.

March 2017 I decided to do Yoga teacher training. You have got to really love yoga to do this, it’s really so physically and so mentally challenging. From the moment you wake up till you go to bed you are studying, reading, talking, living, breathing and practicing yoga for weeks. But I loved every moment of it. The first thing I discovered was that standing in front of a group and teaching is really hard work, respect to all teachers out there, no matter what you teach. The next thing i discovered when teaching yoga was the room never changed, The mood never changed, the meditation feeling never changed. Been a practitioner or a teacher, the same thing happens in class. Yoga is never-ending, there is always more to explore as a practitioner and as a teacher. I am still in the early days of teaching but I love it. I am beginning to think that it’s the best job in the world.

The Yoga community has a great bunch of people and no wonder why we are all happy, we are doing something that is healthy for the body and mind. You don’t have to be in pain to start yoga, start before your body goes bad, make yourself stronger, work those muscles, joints and ligaments and keep every part of your body in good shape.